That's how many we caught!

On Monday 27th January, a crack team of Scottish cannon netters arrived into Dublin to assist the Dublin Bay Birds team catch and colour-ring some waders. The Scottish team, or Team AwesomeTM, as they (aptly?) call themselves, hit the ground running and went straight out to recce sites in north Dublin Bay. Further recces were carried out the following day, before an evening mist-netting session produced 27 birds. One of which, a Redshank, was released after colour-ringing in a technologically advanced state, with its radio transmitter beeping away as it flew off over the Tolka Estuary and onto Dollymount Strand in the darkness.

Wednesday morning saw the team converge on the south lagoon at Bull Island in an attempt to cannon-net some Redshank. As luck would have it, a group of foraging Redshank were flushed from the adjacent driving range by a golfer, and, in an incredible stroke of luck (or more Team AwesomeTM genius?), the birds immediately landed right in front of the net, which was promptly fired. Six Redshank caught. All were colour-ringed and two were selected to be fitted with the two remaining Redshank radio transmitters.

With the forecast looking good, the wind direction being just right to push the roosting birds into the best catching spot and the mid-morning high tide being just the right height to further corral the birds, it seemed the stars were aligning for a great catch.

We assembled at Booterstown DART Station at 07:00 for a briefing. The large team, which comprised Team AwesomeTM, BirdWatch Ireland staff, NPWS, members of the Irish Midlands Ringing Group, local ringers, ring readers and the Dublin Bay I-WeBS counters, made light work of ferrying the gear out to the spit. As we were cut off by the encroaching waves, and as the tide forced the foraging waders towards their roost, we lay down in the marram grass and the anxious wait began.

Tension mounted as the tide reached its climax. The radio chatter from the firing position was positive - it was looking good. The final instructions were given and red button was pressed! Suddenly, everyone was moving. Legs, that were numb from hours lying on the cold sand, were forced into action to race to the nets to extract the haul. Hundreds of Knots, Bar-tailed Godwits, Dunlins and Oystercatchers had been caught! As the extractors bent to their task, the “runners” ferried the birds to the waiting holding pens where they would be kept calm before ringing. While the Knot and Dunlin were BTO ringed and released, a sample of the Bar-tailed Godwits and all of the Oystercatchers were colour-ringed. Four of each of these species were also fitted with radio-transmitters. In the catch, we had "controls" (birds ringed elsewhere) from the UK, Germany, Norway, Iceland and Holland - watch this space for more info on these birds. Ewan, one of the Scottish team, recognised the ring number on one of the Knot and later told us that he had ringed the bird as a juvenile on the Ythan Estuary in Scotland in August 2009!

In all 1,673 waders were ringed and released on the day - a mammoth effort.


A much smaller team regrouped the following morning for more cannon-netting, this time on the dropping tide at Merrion Gates. Redshanks were once again the intended targets, and before long, a small group of "smalls" were netted. Saturday followed a similar pattern, and between the showers we managed a small catch of 6 Redshank and 2 Dunlin.

A great week’s ringing, but in a way, the work is only just beginning. There’s no point colour-ringing birds if you’re not going to re-sight them! And there’s no point deploying radio-transmitters if you’re not going to put them to good use! And that’s partly the reason for this blog going up so long after the catches! We have been out and about in Dublin Bay (and beyond) reading the rings and radio-tracking. One of the research questions we have is whether the birds use the same areas by day and at night. Without round-the-clock radio-tracking, this would be very difficult to answer comprehensively, but round-the-clock radio-tracking means that…well, it means that we get no sleep, but more importantly, it means that we can delve even further into questions surrounding how these birds are using Dublin Bay and find out a huge amount about their wintering ecology and behaviour. 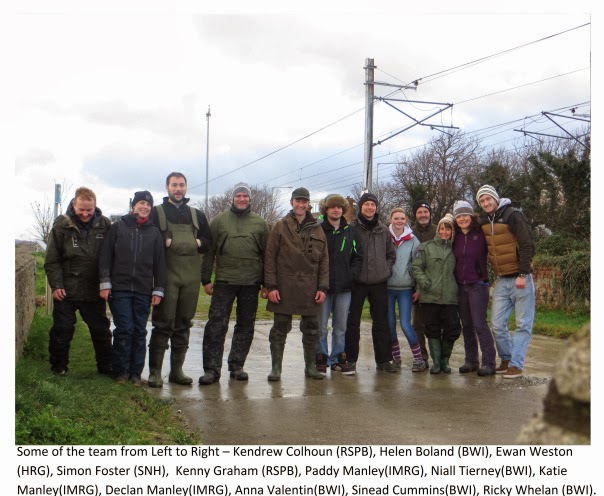 Please make a special effort to get out and about to search for these ringed birds. I always say this, but every ring read is potentially a missing jig saw piece or the start of a very interesting story. I always say this too, but the welfare of the birds is always paramount - this sustained spell of stormy weather and very high tides is already challenging the birds - so it’s vital that you don’t disturb them by getting too close while ring-reading. Please submit your sightings using this page, or by email to ntierney@birdwatchireland.ie

Totals for the week (new/control):